Ticked off one entry in my Dragonfly Collector bucket list, which is to perform my own songs backed up by an orchestra in a concert. Definitely a milestone for my budding solo career. Gerard Salonga and the ABS CBN Philharmonic Orchestra did a wonderful job despite the of lack of time to do a proper rehearsal (we were only able to do so a few hours before the concert). It was also my first time to perform in one of the world’s largest indoor arenas – not one, but two songs from my debut album: “The World Is Your Oyster” and “The Tragic Story Of Joshua and Fiedme.”

The World Is Your Oyster

The Tragic Story Of Joshua And Fiedme

In my mind, I do believe an orchestra is a perfect complement to my melodic pieces. And hearing it for the first time is personally awe-inspiring. 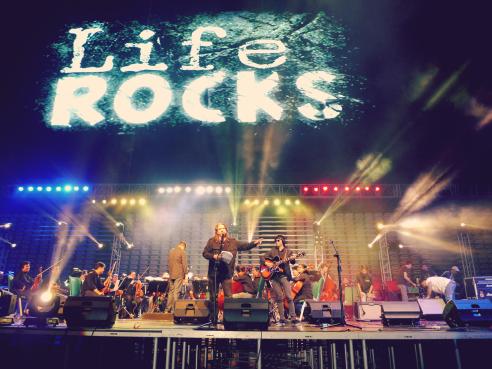 A warm introduction by The Doctor, Ramon Zialcita.

Telling the story of Joshua and Fiedme.

Thanks to Yanna Acosta, Nino Barrios and the people behind LIFE ROCKS TV for this wonderful opportunity!

This is my second time to perform with an Orchestra. The first one was an invite from the Manila Symphony Orchetra to sing “Stairway To Heaven” during their “Rock Of Ages” concert at Ayala Museum on May 21, 2015. A magical experience on both occasions.