My classmate tagged me in an old photo taken over fifteen years ago during a speech choir performance at Mariano Ponce High School, a public school in my hometown of Baliuag, Bulacan. It brought back happy memories in my young days.

I was rather active in the performing arts when I was young and even signed up for theater group called DULABAY (Dulaang Bayanihan) during my college years at the Philippine Women’s University in Manila. I know, I know… you might wonder, not that I have less testosterone for a man to study there, but they do have affiliate schools/courses that allow male students like music, fine arts and the culinary arts.

The photo below is an action shot of our speech choir group composed of classmates in a special science class. We performed a poem by  R. Zulueta da Costa entitled “Like The Molave“. I portrayed the image of a skinny Jose Rizal. 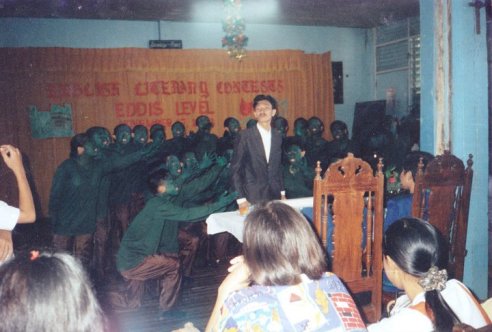 Rafael Zulueta da Costa (born 1915) is a Filipino poet. He uses the name R. Zulueta da Costa as a writer, and Rafael Zulueta as a businessman. He was a graduate of De La Salle College (now University) where he specialized in business administration. He began writing poems in Spanish and later he also wrote in English. His most famous work is Like the Molave and Other Poems, which won the Commonwealth Literary Award for Poetry in 1940. source: Wikipedia

I served as the group’s trainer and director and we rehearsed rigorously for weeks. It was all worth it because we proudly and unanimously won our way through the school, district and division level. I just wished we had any means to record in on video during those times. The victory was one of the most memorable.

If only each of us Filipinos will adapt to the strength, values and moral fiber of our heroes, we will be stronger as a nation. The Molave tree is the dominant timber species in monsoon forest in the Philippines. Like modern heroes, the molave tree is already a threatened specie, exploited for its highly prized timber.

Not yet, Rizal, not yet. Sleep not in peace:
There are a thousand waters to be spanned;
There are a thousand mountains to be crossed;
There are a thousand crosses to be borne.
Our shoulders are not strong; our sinews are
Grown flaccid with dependence, smug with ease
Under another’s wing. Rest not in peace;
Not yet, Rizal, not yet. The land has need
Of young blood-and, what younger than your own,
Forever spilled in the great name of freedom,
Forever oblate on the altar of
The free? Not you alone, Rizal. O souls
And spirits of the martyred brave, arise!
Arise and scour the land! Shed once again
Your willing blood! Infuse the vibrant red
Into our thin anaemic veins; until
We pick up your Promethean tools and, strong,
Out of the depthless matrix of your faith
In us, and on the silent cliffs of freedom,
We carve for all time your marmoreal dream!
Until our people, seeing, are become
Like the Molave, firm, resilient, staunch,
Rising on the hillside, unafraid,
Strong in its own fibre, yes, like the Molave!